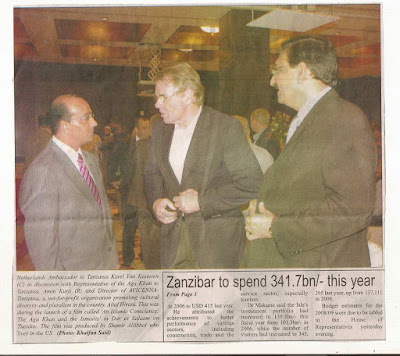 Netherlands Ambassador to Tanzania Karel Van Kesteren (C) in discussion with Representative of the Aga Khan to Tanzania, Amin Kurji (R) and Director of Avicenna Tanzania, a not-for-profit organisation promoting cultural diversity and pluralism in the country, Altaf Hirani. This was during a launch of a film called 'An Islamic Conscience: the Aga Khan and the Ismailis' in Dar es Salaam on Tuesday. The film was produced by Shamir Allibhai who lives in the US.
Posted by Shamir Allibhai at 4:30 PM