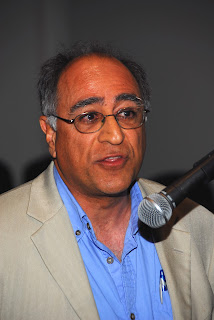 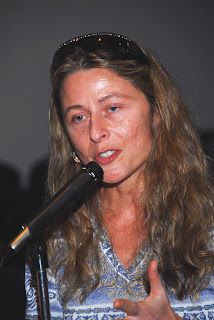 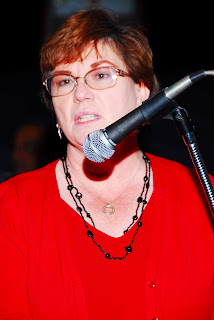 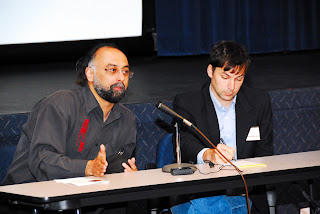 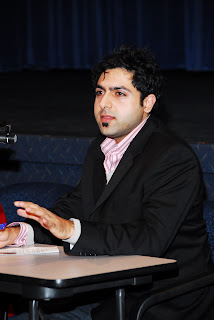 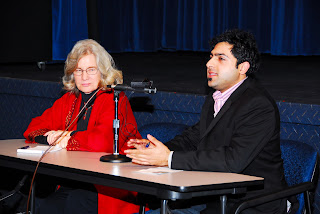 Photos courtesy of Nina and Gafoor Jaffer
Posted by Shamir Allibhai at 2:13 PM No comments:

I have to say it was really fun and interesting to be at the LA Screening of the film. President Robert Klitgaard and Dean Karen Torjesen of the Theological School gave warm introductions and after the film, there was a lively discussion.

From my last post I was wondering whether people in California had a different perspective on Islam and its relationship to the West but I did not get a definite answer to this as the audience was probably a self-selecting group. Those who are interested in Islam and/or the Aga Khan and the Ismailis came to see the film and for that reason they tended to have a good base of knowledge on the subject already.

Next time I will discourage weekend screening as I dont think they work too well at universities if one is aiming to get a packed and diverse audience. Claremont Graduate University had reserved approximately half the seats for students but as it was a Saturday (and a beautiful day), only some of them showed up. It is tough to get students to come to school on a weekday let alone on a weekend! But I did gather useful feedback from many who came, and it is interesting how this film has appealed to people across all age groups. Brief snippets of feedback, this is from a parent:

"I think every Ismaili must see this film as it can be used as a great tool to articulate and express some aspects of our faith. Specially our Ismaili youths here in USA really needed this. I will definitely recommend it to all I know."

From a young adult:
"While it may not have been said enough, you must be congratulated for the massive efforts you have made to start what I hope is a healthy debate and dialogue on Ismaili and wider Muslim identity and relations. "

A student:
"I think that the film is a very appropriate introduction to the uninformed about Ismailism, and positive Islamic values that are fundamentally held by a large number of Muslims, but which are swept under the rug by mainstream media."

Overall, it seems many people are concerned about the Muslim - non-Muslim world divide and trying to "figure it out." I am hopeful with the energy people have to wanting to learn more. One question that has come up before is: how do we get this film to the wider world? I said I am trying to get the film onto television in places such as America but without a secured broadcaster yet, it will be through the screenings people host and through bringing their friends and colleagues to them. With the DVD's, I hope people invite their workmates, classmates, and everybody else to view it with them in their homes. And have a discussion afterwards. This film is but a perspective showing but a side of Islam. How does the film touch on the bigger issues facing our world? What can each of us do to help play a role in solving the 'clash of ignorance'? Or you may disagree altogether and that there is a clash of another sort. Whatever the case: constructive dialogue is good.
Posted by Shamir Allibhai at 5:18 PM No comments:

And very excited. (Partly because of the wonderful California weather, it was cold, raining and snowing in Boston when I left!)

Thank you to Claremont university for organizing and to all those who put in countless hours.

There is a much more laid back culture here than on the east coast - I wonder how, if at all, that has affected people's understanding of Islam or search for knowledge of it. Or their proximity to Hollywood and its big blockbuster films - how will they view an independent documentary differently than other parts of the USA which don't have a film industry?

Updates after the film...

Posted by Shamir Allibhai at 2:07 PM No comments:

At a time when the divides between the Muslim and non-Muslim worlds seems to be getting worse, not better, the first west-coast viewing of “An Islamic Conscience: The Aga Khan and the Ismailis,” will take place on Saturday, February 9 at the Claremont School of Theology. The 3 pm movie will be followed by a panel discussion involving Claremont Graduate University’s School of Religion: Dr. Hamid Mavani and Dean Karen Torjesen.
The film—produced by Shamir Allibhai—tells the story of the Aga Khan. Born into a world of wealth and privilege, he devotes his life to eliminating poverty and inequality. A religious leader who traces his ancestry back to the Prophet Muhammad, he struggles to balance the traditional with the modern.
The Aga Khan is the spiritual leader of Ismaili Muslims, a Shi’ite sect with 15 million followers around the world. At a time when Islam is at odds with itself and with the West, the Aga Khan represents a voice of moderation, speaking out for pluralism and diversity, and promoting dialogue between civilizations.
The film features a rare interview with the Aga Khan, along with seldom-seen archival footage and commentary from political scholars. Founder of the largest private development agency, the Aga Khan calls the current divide a clash of ignorance – not a clash of civilizations or even a clash of religions. What does he have to say about this post 9-11 world?
Claremont’s involvement is fitting, considering the School of Religion’s mission to stress tolerance and pluralism.
“The point is to focus on a common humanity - for Muslims and non-Muslims alike,” Allibhai said. “This side of Islam hasn’t been shown accurately and fairly. Most Muslims are peaceful, don’t speak Arabic and live outside the Middle East—in places like Asia and Africa.”
The film was written and also produced by Bill Cran, a multiple Emmy-award winner. The event begins at 3 pm, Feb 9, 2008 at the Claremont School of Theology’s Mudd Theater
For more information, visit www.agakhanfilm.org.