Yesterdays screening, hosted by the Muslim Students Association at Emory University, was very touching. The audience expressed wonderful words of appreciation and I found their questions thought-provoking and intellectually-curious.

I spent two hours after the film screening answering questions during the Q+A and chatting to the audience members plus signing DVDs. Then many of us went for dinner and continued the discuss there.

I think what I most felt touched by and grateful for is that this film is still traveling around. Its been well over a year since its release. When I was making the film, I never would have imagined the film to still be screening this long since its original premiere. I am always pleasantly surprised when I get another request for a screening and though the DVD has been circulating widely, especially within the Ismaili community, they still come in full force to support the endeavour.

It has been such a privilege to meet so many people and hear if and how the film has touched them, or provided them new insights. When I was in the DR Congo last fall for a premiere, one Ismaili said to me, "You have given me an identity (with the film), thank you." I corrected him saying he always had an identity but maybe, the film helped him articulate it further. His point and where he was coming from was not lost besides the emotions and feelings he was trying to convey to me through his powerful words.

Yesterday, undergrads told me how when they first got the DVD they analyzed each aspect of the documentary, discussing and debating it for hours into the early morning (as Heena mentions in the previous post). What a compliment.

It has been a privilege to make the film, absolutely. And when I was making the film I would watch and observe, for example, the Sunni cameramen/sound men or the Christian local producer or even the Muslim driver, who never had a chance to go to school, and how they would be so engrossed in the interviews I was conducting. They were being exposed to a community, the Ismailis, which they never had heard about or knew very little about. In the locations I was taking them to to disect a story they would take great interest in what was going on. Why would the driver be right there at all the interviews and then ask me followup questions once we stopped filming?

Who is the Aga Khan? What is the Shia theology? What is the AKDN? Why are they building a multi-million dollar park in Cairo if there are no Ismailis there? And the questions would just keep coming. A dialogue on a very small scale had begun. My objective was clearly only about pursuing the making of this film at that time. The positive exposure the local team were getting was unexpected and I took comfort in these inadvertent side benefits that even if this film doesn't ever get broad exposure, the process has been positive to those around me (I hoped). Change had been created, albeit, very small. Is this something you tell yourself to keep up motivation and enthusiasm when documentary making gets tough? Maybe. But I solidified my thinking on the belief that it wasn't just about "B": it was about getting from "A" to "B".

If "B" is making the film and screening it a number of times, then we have come close to achieving this but it has been everything to try and get to "B", and the participation of so many to help get to "B", which I feel most moved by. This journey includes the thousands of people I have met and the conversations I have had with them - Muslims and non-Muslims alike. To hear their questions about the film, their concerns on the divides, their hopes for peace - and all through their specific lens tinted by culture, religion, geography.

A real pleasure and privilege this journey has been for me and for all the gratitude I have been shown by audiences, it is I who, too, am grateful to you and them.

Yesterday someone commented, "You must have seen this film hundreds of times by now." Yes, its kind of like a high-class problem. That is, if it is a problem for one, it is a good problem to have! (I personally dont have issue with watching the film - biased / obsessed I clearly am!)

And time and time again, story after story, response after response, I can't help but reflect on what Prophet Isa / Jesus said: From everyone who has been given much, much will be required. (Luke 12:48).

I encountered this movie last year around the Golden Jubilee darbar time in America. A few friends (Ismaili and nonIsmaili both) and I had gotten together to watch the documentary as we had seen some things about it on Facebook. We of course have now watched this film a multiple times, but that first time we sat down to see it, we paused about 5 minutes into the movie and basically just tried to take in the captivating scene of the Tajik mountain scenes: it was truly breathtaking. We continued to watch but paused every 15-20 minutes to - believe it or not - analyze the movie scenes and discuss it in depth. Imagine, a group of college students who could be doing anything else in the world were sitting in our free time not only watching this movie but discussing our views and religious opinions. That first sitting lasted 6 hours!!! It is a great film and we watched it many times after (of course not always discussing it for that long!!)

A few months later when my arabic professor sent a message to us about the Aga Khan and the Ismailis being screened in Lebanon, I got really excited! I asked her where she had heard about this and she said Shamir was a student of hers in Lebanon. I got his contact information from her and ever since had been trying to get a film screening here at Emory University. When the MSA was planning Islam Awareness Month, I found my medium to bring Shamir and his film here!

With many events during the month of February, this film screening and Q&A was one of the most successful event and with one of the greatest turnouts. We had about 80 people come out to the event and actively participate in the Q&A. Students, Faculty, members of the Atlanta community and fellow Ismailis came out to view this film and afterwards were very impressed with the event as a whole. Students who had never seen the film or knew much about Ismailis, were in awe of the community and were very grateful that Shamir had come out to answer questions because it provided them with a first hand response from the producer who was present in the making. The founder of our Emory MSA, Isam Vaid, also had a few thoughts about the event: he was excited to finally see the plurality of our Muslim population and see the different faces of Islam present. Overall, this screening was a positive initiative for Emory's campus and I hope to have Shamir do other screenings (perhaps in Dallas my hometown!!!)

Daily at 16.30 at Cinema Bio Geneve Carouge - film will also go on next week so already week 5! 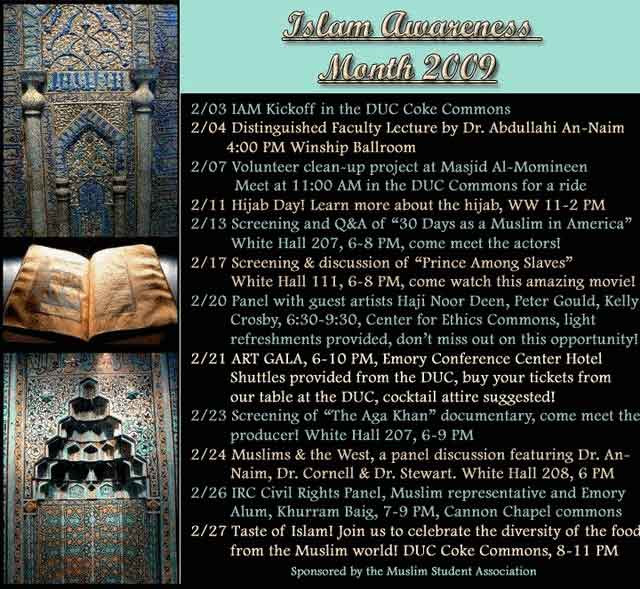 Born into a world of wealth and privilege, he devotes his life to eliminating poverty and inequality. A religious leader who traces his ancestry back to the Prophet Muhammad, he struggles to balance the traditional with the modern.

At a time when Islam is at odds with itself and with the West, the Aga Khan represents a voice of moderation, speaking out for pluralism and diversity, and promoting dialogue between civilizations. But will he be heard?
Posted by Shamir Allibhai at 11:22 PM No comments: