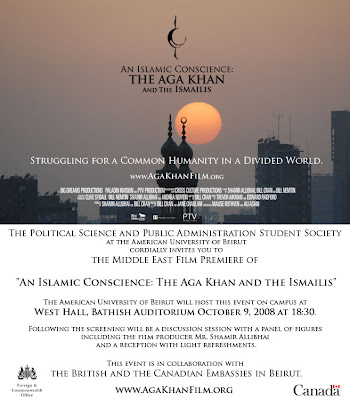 The final chance to catch a screening of AN ISLAMIC CONSCIENCE in Beirut:

The British Ambassador to Lebanon Frances Guy and her respective embassy and the Canadian Ambassador to Lebanon Martial Pagé and his respective embassy will host AN ISLAMIC CONSCIENCE: the Aga Khan and the Ismailis with the Political Science and Public Administration Student Society at AUB. The screening will happen on Oct 9th at 18:30 at West Hall, Bathish Auditorium, the American University of Beirut. The film will play in English with Arabic subtitles and it will be followed by a panel discussion. See you there!
Posted by Shamir Allibhai at 11:06 AM