More photos from the Premiere at the Kempinski Hotel, Dar es Salaam, June 17: 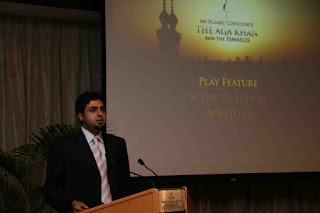 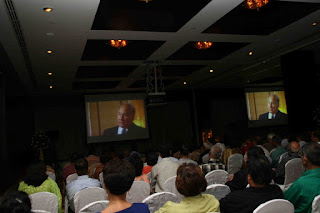 There was actually a third big screen too to cover the entire venue. 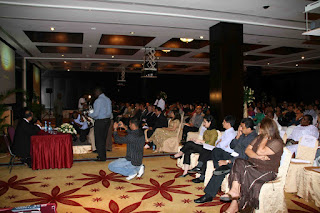 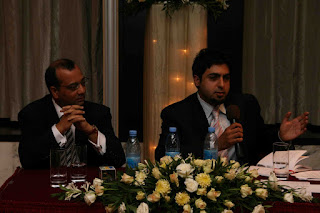 Alkarim (left), a director of Avicenna and the moderator for the Q+A 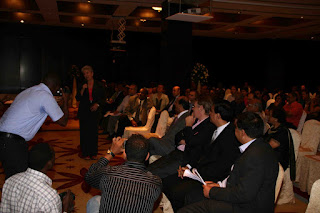 COMMENTS BY JANET SIDDALL, HIGH COMMISSIONER OF CANADA:
AN EXCELLENT FILM THAT UNDERLINES THAT HIS HIGHNESS AND OUR PRIME MINISTER WERE SUCH GOOD FRIENDS, SHARED VALUES AND HAD A COMMITMENT TO DIVERSITY 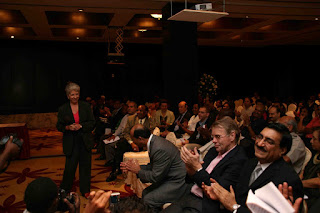 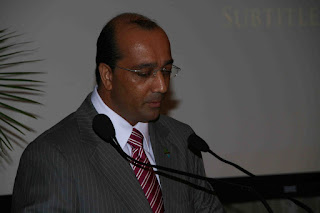 No, Alkarim did not change his suit midway through the screening: this is his twin brother and partner in Avicenna, Altaf Hirani, seen here giving the opening remarks pre-screening.

Africa Launch of the film

AN ISLAMIC CONSCIENCE: The Aga Khan & the Ismailis,


On behalf of AVICENNA TANZANIA, it is indeed a great honour for me to welcome you all to the Africa launch of the film: AN ISLAMIC CONSCIENCE: The Aga Khan & the Ismailis.

I am equally pleased to welcome Shamir Allibhai - the Producer of the Film, who has kindly joined us this evening all the way from Boston, USA.

I am also happy to inform you that there will be a public screening of this film at the New World Cinemas tomorrow June 18, 2008 at 4.30 p.m.


AVICENNA TANZANIA is a not-for-profit organization founded early this year with the aim of promoting cultural diversity and pluralism in order to foster harmony, understanding, tolerance and peace between various peoples and groups in Tanzania. The organization also supports the development of civil societies and various charitable initiatives to alleviate poverty.
AVICENNA was inspired by the Muslim ethic of inclusiveness which stipulates an inclusive vision of society. This ethic further guides all Muslims in the sense that the divine spark that bestows individuality also bonds individuals in a common humanity.

The Holy Quran says “Humankind has been created from a single soul, as male and female, communities and nations, so that people may know one another”. It invites people of all faiths to a common platform, to vie for goodness. The holy Prophet sought to harness individual and group diversity and talents to serve common needs of different religious groups, among whom he encouraged a spirit of harmony and tolerance as constituents of a larger community of his time.

In the spirit of promoting interfaith dialogue, we can look back at some powerful chapters in history when Islamic and European Cultures interacted co-operatively and creatively to realize some of the civilizations peak achievements. Our challenge today therefore, is a clash of ignorance and not civilization.

Furthermore, the most successful democracies are those in which non-governmental organizations of civil societies also play a vital role. Civil society is powered by private voluntary energies too that are committed to public good and include institutions of education, health, science and research. They embrace professional, commercial, labor, ethnic and arts organizations and others devoted to religion, communication and the environment.

The world cannot be safe for democracy unless we as individual citizens and/or groups also make the world safe for diversity and play our part in strengthening these vital platforms.

Fortunately, we live in Tanzania whose great gift to the world has been its shining example in building a strong spirit of pluralism with the net result that it is regarded as one of the most stable and peaceful countries in Africa.

In conclusion, it is therefore my humble prayer that today’s event which is also a catalyst for launching AVICENNA TANZANIA will in some way contribute to further enhancing these goals.

Posted by Shamir Allibhai at 8:23 AM

Congratulations dude! - looks like Dar was a big hit...

Good luck with Uganda and Kenya.