Shamir in the Pamirs

There are effectively two ways to get to Khorog from Dushanbe: a long, at times treacherous, bumpy drive or a plane. The flight from Dushanbe to Khorog can be quite precarious too. The small plane can only fly when the weather is good because even at its maximum altitude, it still needs to pass through the mountains. At certain times during the 1-hour journey, you are so close to the peaks that it feels like the wings are going to get clipped by them. 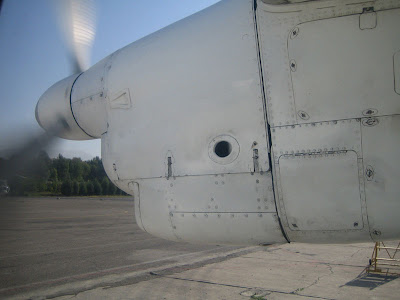 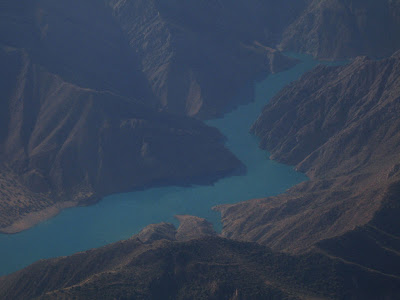 All said, it was a spectacular view. 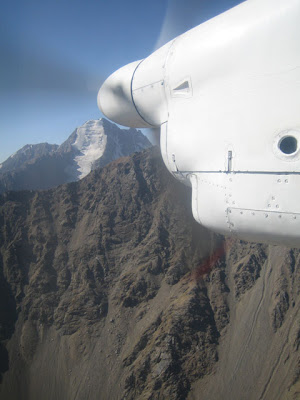 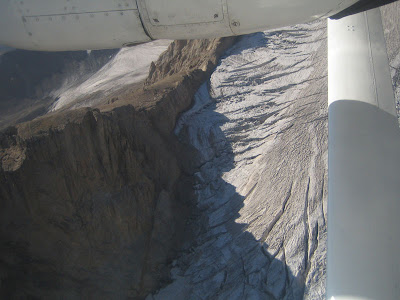 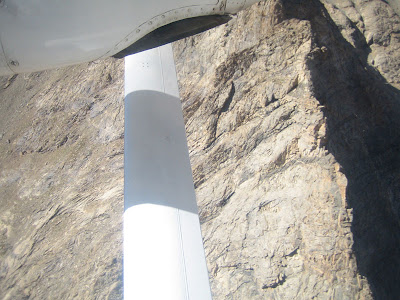 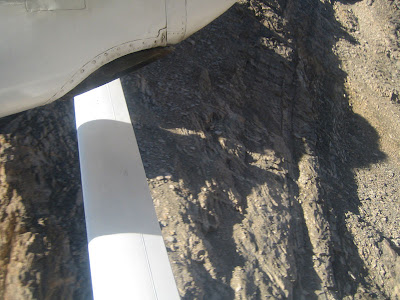 Reach out and you may just touch the Pamir mountains 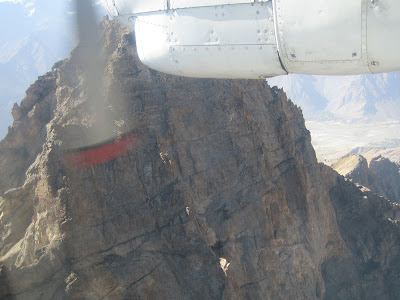 What was the plan for screening in Khorog?

Well…there really wasn’t one. I wanted to do a screening there but I figured I would just go there and sort it out. I had received a few messages on Facebook this year requesting to play the film in Khorog so I thought, will get at least five people at the screening even if the screening is just playing the film off of my laptop!

One of those Facebook messages was from Vadim (left). 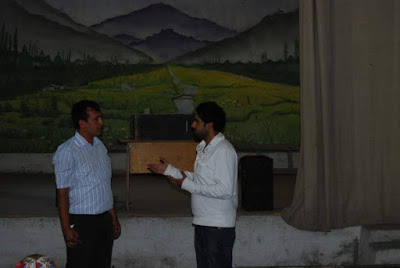 Vadim was the key force for the screenings coming together in Khorog and he worked tremendously hard to make it happen. He picked me up at Khorog’s airport and I thought from there we would go to lunch to plan the next few days to make a screening happen. As soon as I sat in his SUV, he was like ‘let’s go.’ I said, ‘where?’ ‘Our first screening is in 2 hours' and off we were.

Armed with a laptop, the film DVD, and a projector and screen that we sourced locally, we were ready to go. The first village we went to was Yomj. 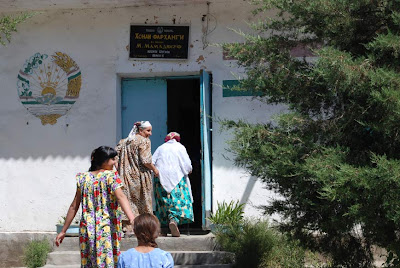 I wasn’t sure how all this worked. Vadim said, "Don’t worry, the head of the village will spread the word of the film and all the people will come. We will screen it in the community centres which are common to most villages." What about the power to run the laptop and projector? He said, "Inshallah, it'll all be fine", trying to instill comfort in me (as he smiled, nervously). 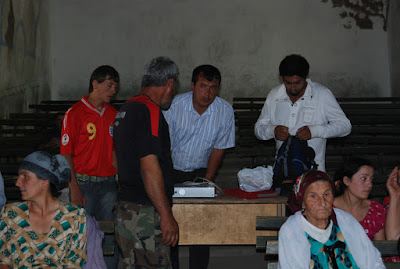 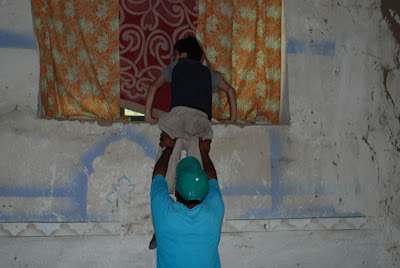 The men from the village helped us set up. They covered the windows with sheets. They setup benches and chairs. And they laid out the wires. As we were about ready to start, the power went out.

We waited for 5 mins, 10 mins, 15 mins. Apparently the next village over was doing some work on the power wires and all subsequent villages lost power. It was going to be awhile till it came back on. Don’t worry, Vadim said.

A few men from Yomj brought out a generator. 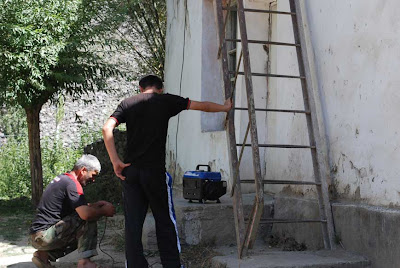 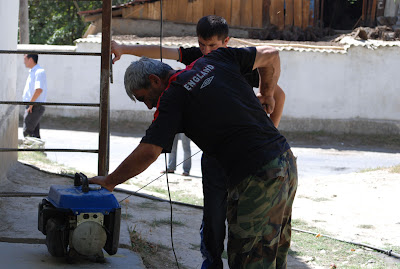 Once the generator started running, we were back on or so I thought. As the generator was being coaxed on, the power surged and it must have been too much for my laptop power supply to handle. The fuse blew. Done. For this screening I had enough battery power to make it work, thankfully, and I would have to sort out my laptop woes later. Thus began our first screening in Tajikistan. 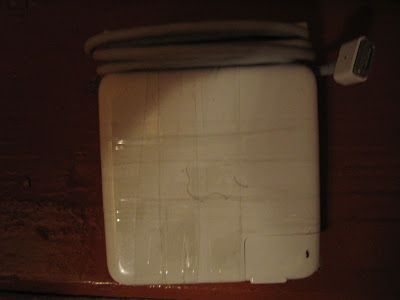 Paperweight, formerly a charger. The tape is because a few Tajiks tried to open and fix the charger, and when unsuccessful, they put it back together.

The screening was a moving experience, and an experience that I felt again and again over the next 7 screenings in Tajikistan.

When the crowd would see Tajikistan on the screen, they would get very excited. When they saw the Aga Khan walking amongst his people, they would start softly saying prayers to themselves. They were teary-eyed at different points in the film and at the end, they said they were upset that it had ended.

We did Q+A sessions after each film and when it was over, they would invite us to their houses for food and tea but we had to decline. We said our good-byes quickly exchanging hugs, smiles, and handshakes: we had more screenings to do. 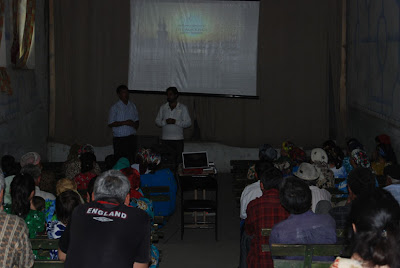 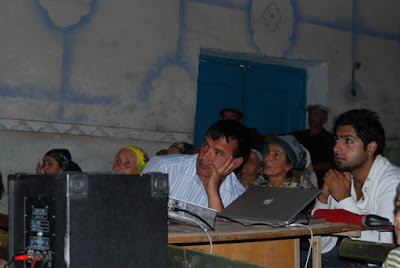 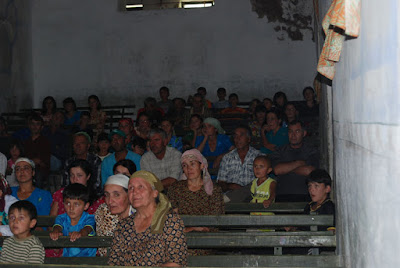 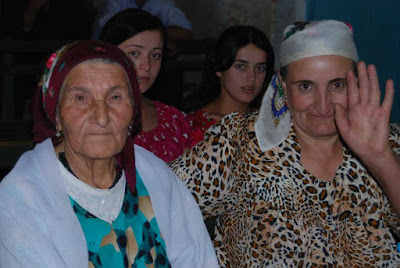 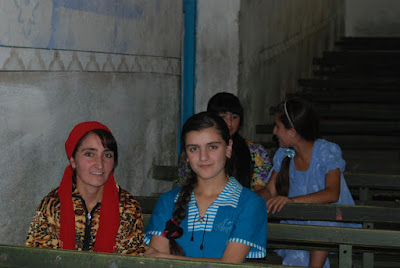 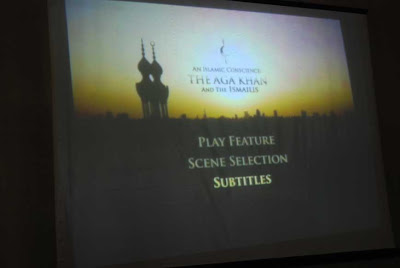 This is the first time we premiered the film with Russian subtitles. 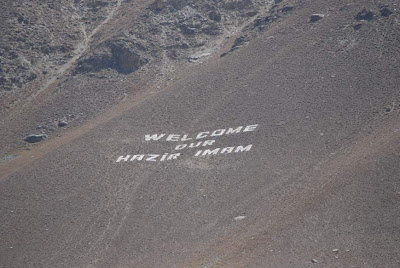 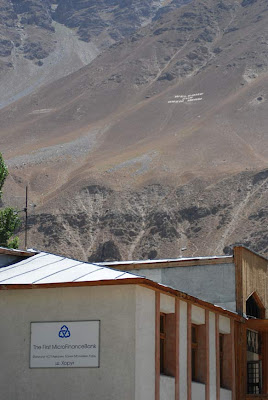 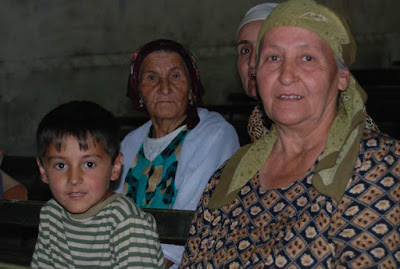 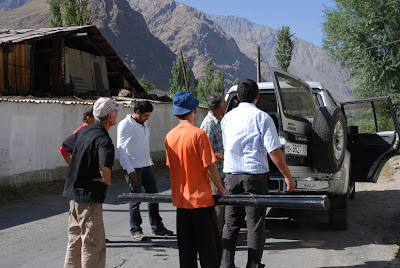 Posted by Shamir Allibhai at 7:04 AM

Wow!!! that's all I'm going to say about the screening experience...

Loved the pics of Pamirs from the plane - I have some from my time in that region traveling in an AKDN chopper...