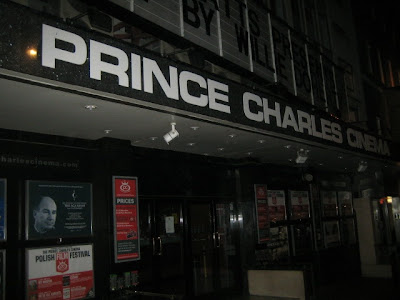 The theatre where we played the film - long after everyone has left. 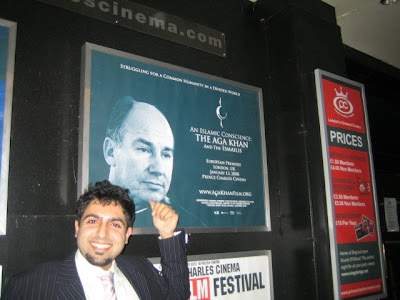 It's Official! Shamir pointing to the big film poster for the London premiere after the event! He still can't believe it all happened! 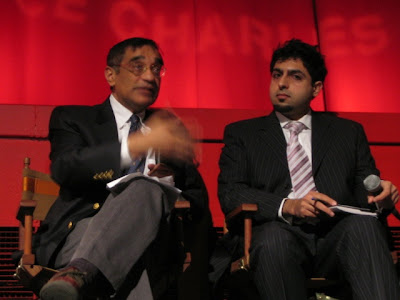 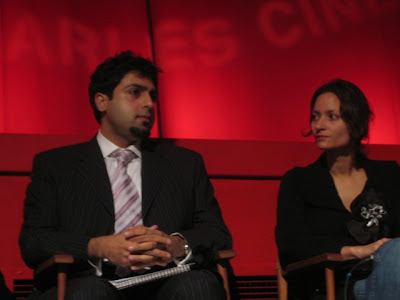 One of the very rare photos of camera-shy Jane Chablani, co-Director of the film.
When you are a filmmaker, you hope you just engage with 1 person. At the screenings on Sunday, it felt we had engaged with many more than that. It was such a great turnout and it seemed everything went smoothly. The film was followed with a panel discussion on religious pluralism both times and we got some wonderful questions from the audience. Above are some of the pictures from the event. Trevor Hall CBE was the moderator and the first panel included Dr. Ali Asani, Jane Chablani (co-director), Raficq Abdulla, and I. The panel after the second screening substituted Dr. Abdou Filali-Ansary for Raficq, with the rest of the members the same. (The substitute

It was so nice to bring back the film to London and to see many of those who were there at the conception stage attend. I also feel optimistic that there is a place for "good" films. There is many in broadcast who like to cover edge and negativity in Islam but it is not representative of the truth of this religion. In the documentary-making world, we use words like "fair" and "balanced" - this surely must apply to what broadcasters play and the impressions they give to their audiences.

Nevertheless, the screenings should go on. I think the film distribution now needs to move to the next stage where people who believe in the cause, champion the film and host screenings such as at universities... The messages need to get out!
====

BIOS:
Trevor Hall CBE (Moderator) was the former Race Equality Adviser to the Home Office's Permanent Secretary of State as well as a member of the Department of Constitutional Affairs Management Board serving as a non executive director. He was the founding chair of THE NETWORK for the Black and Ethnic Minority staff in the Home Office, vice chairman of the Ethnic Minorities Advisory Committee, Judicial Studies Board and chairman of the Commonwealth Youth Exchange Council. In addition, he has also contributed to development of race and diversity training for the police. Trevor’s current posts include principal equality and diversity consultant to TMP Worldwide, managing director at Ridleyhall Consultancy as well as executive vice-chair of the Windsor Fellowship. In 1997 he was awarded the OBE for his services to race relations. On retiring in 2002 as a senior civil servant, he was awarded the CBE.

Dr Abdou Filali-Ansary is Director of the Institute for the Study of Muslim Civilisations at Aga Khan University. He previously served as founding director of the King Abdul Aziz Foundation for Islamic Studies and Human Sciences in Casablanca, Morocco and as secretary-general of the Mohammed V University in Rabat. He has contributed to the academic discourse on Islam and modernity and on democratisation and civil society in the Middle East and has written books and articles on Islam's reformist traditions, including Is Islam Hostile to Secularism?; Reforming Islam? An Introduction to Contemporary Debates as well as a translation into French of Ali Abdel-Raziq's landmark book Islam and the Foundations of Political Power. In 1993 he co-founded the bilingual Arabic-French journal Prologues: revue maghrébine du livre and served as its editor until 2005.

Shamir Allibhai is the producer for the documentary An Islamic Conscience: the Aga Khan and the Ismailis. In 2005, he co-founded and was the commercial director of the Channel 4 British Documentary Film Foundation. Shamir was also instrumental in launching BRITDOC, the U.K.’s first documentary feature film festival in July 2006 in Oxford. Shamir is currently a candidate for a Master’s of Theological Studies in Islamic Studies in 2009 from Harvard Divinity School, Harvard University.

Jane Chablani is a Director of the documentary An Islamic Conscience: The Aga Khan and the Ismailis. Before this film, she directed the 90 minute feature documentary Stealing Klimt. A 60 minute version of this film was aired on the BBC in 2007. Jane has worked with the likes of National Geographic and Discovery Channel.

Raficq Abdulla MBE is a barrister, as well as a writer, public speaker, and a broadcaster. He was formerly the University Secretary and legal adviser to Kingston University, where he presently serves as Visiting Fellow. His publications include Words of Paradise, a new collection of interpretations of the poetry of Jalaluddin Rumi (1207-1273) and a new interpretation of The Conference of the Birds by Farid al-Din Attar (1142-1220). Over the past 15 years, Raficq has written and presented a large number of programmes on Islam for BBC World Service radio, including The Four Caliphs and a series on the life of The Prophet Muhammad. He has written screenplays for Channel 4, including the award-winning films Blood of Hussein. In 1999, he was awarded an MBE for his interfaith work among Muslims, Jews, and Christians. In November 2007, he gave the second lecture in the ‘Contemporary Islams and Muslims' series: Rumi to Adonis: The Conference of the Bards at the Institute of Ismaili Studies. This will be published by the Institute of Ismaili Studies in 2008.
Posted by Shamir Allibhai at 10:24 PM

Great to learn that the premier went smoothly ...best of luck and continued success for your journey.

Is there a possibility to view the panel discussion from London similar to the one at Harvard ? ... if so pls post the link.

The discussion was recorded and we hope to get to it in a few weeks.