AND WE ARE LIVE! 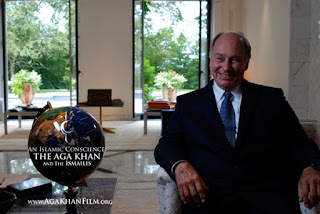 Full website is now up with story details, bios, and much more: www.agakhanfilm.org

For many years now, we have heard commentators associating Islam with extremism and for many of us, those who are Muslim and even those who are not, we are concerned as to how the faith of over 1 billion people is being misinterpreted.

Some years ago, I heard a Muslim leader say, "Stand up... Speak openly and frankly about what is our interpretation of Islam. Speak about the fraternity and the peace and the respect that we wish from society and we wish to offer society. Speak of the discipline, of the humility, of the care that Islam teaches us." I believe he was speaking of the conscience of Islam and with his words in heart, I believed it was time to make a documentary about Muslims who respect religious pluralism and live by the principles of peace, tolerance, compassion, generosity, dialogue and forgiveness, above all else.

I also wanted to make a film about Muslim leadership, responding to what some have called an 'authority deficit' in the Muslim world. The image too often seen in newspapers, and on television, is that of ranting and raving, anti-Western clerics. But we hardly hear of progressive Muslim leaders who engage in quiet diplomacy, promote inclusive forms of development, and live exemplary lives in selfless service to others. This essentially is the story of His Highness the Aga Khan and the community of Muslims he leads, the Ismailis.

Last week, the film, AN ISLAMIC CONSCIENCE: the Aga Khan and the Ismailis, which we started two years ago, involved production in nine countries all over the world, and is directed by multiple Emmy-award winning filmmaker Bill Cran and Jane Chablani, had its debut at Harvard University at the invite of the John F. Kennedy School of Government. We are very happy at how well our launch went with such a great turnout by many people of many different backgrounds.

People there asked me if it was a relief to finally finish this project to which I responded, the journey of making the film has ended but now the journey of getting the film seen and distributed with all its messages begins. I hope you will join me by getting your friends and colleagues to watch the film and to help show the plurality of Islam and a side of peace and tolerance not too often covered in the mainstream media.

Also the next chance to catch the film will be in Canada on television:

The broadcaster has the choice of what they would like to call the film and in Canada, Vision TV is calling our documentary The Aga Khan: A Voice of Reason. This broadcast will be 25% shorter than the DVD film so as to fit into a television hour with its commercials.

On behalf of the entire team, we hope you enjoy the film and we thank you for your continued support.

PS - The films are being distributed as a not-for-profit with the profits going to a charity TBD but ideally one that is focused on helping to bridge the Muslim – non-Muslim world divide. If you run a charity that you think we should support, please let us know. info@ourbigdreams.org

AN ISLAMIC CONSCIENCE: the Aga Khan and the Ismailis

Posted by Shamir Allibhai at 3:04 AM

Congratulations on the completion of this project. I can't wait to see it here in Canada in January. I'm also looking forward to purchasing your full package of both films. I was wondering if you have heard or received any feedback from the LIF or HI?

Hi,
I'd like to purchase the 2 dvd set, but I just noticed that the final page that requests credit card information is not secured i.e. it is http:// and not https:// .
Could you please confirm that and take any steps if necessary?

Soach, we updated the ecommerce portion and it should be fine...

I think they may be slightly optimistic within the context of the project's uniqueness.